When it comes to creating the next new, innovative business, no one can pick winners – not even the geniuses of Silicon Valley. The evidence for this is overwhelming. At any one time, there are more than 20,000 funded startups here in the San Francisco Bay Area. The big successes we get are from lots and lots of smart people trying small improvements until one of them works. Venture funds are organized around the expectation that the majority of their portfolio firms will fail.

When I’m giving a talk and point out that no one can pick winners, inevitably a hand goes up in the audience and someone asks a version of, “Well, what about Steve Jobs? He was always right.” Sigh.

Let’s look more closely at the track record of this gifted genius and his amazing collaborators who have had such a big impact on how billions of people live their lives every day.

What I learned from my research is that even for a genius, innovation:

Apple Computer was founded in 1976 by Steve Jobs, Steve Wozniak, and Ronald Wayne to sell the Apple I computer that Steve Wozniak developed. They sold about 200. Based on that interest, they developed and released the Apple II in 1977 and it became perhaps the most successful mass-produced computer of its time. They ended up selling more than 6 million Apple IIs. 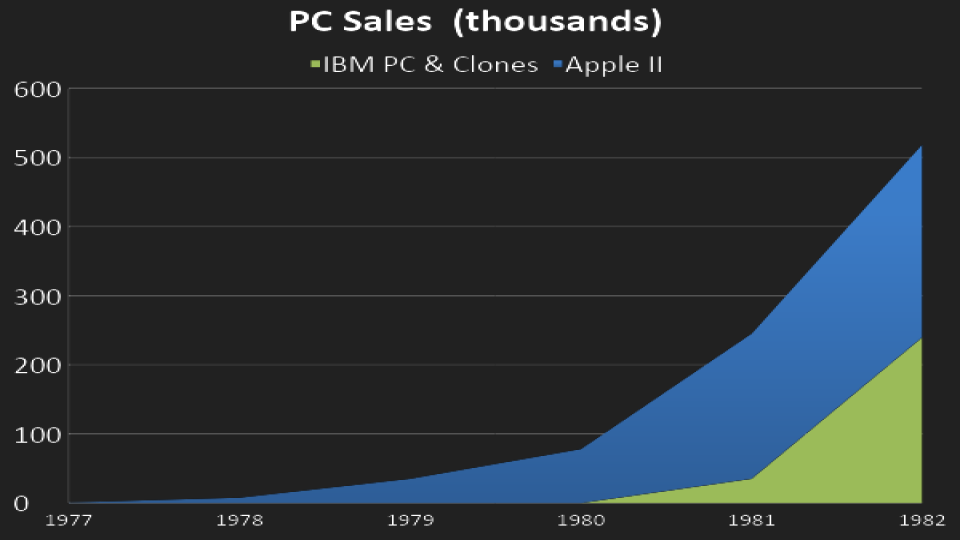 Jobs’ next computer was the Apple III, which was released in 1980. Perhaps 70,000 units sold. That compares to roughly 3.5 million PCs over the same period.

The Macintosh was released in 1984. Apple sold about 320,000 units in 1984. Mac sales went down in 1985 to 200,000. 2 million PCs were sold in 1984. It’s easy to forget that companies like Sun Microsystems were making billions selling expensive engineering and graphics workstations with WIMP-based interfaces years before the Mac debuted.

Apple’s Place In The Ecosystem For 20 Years – A Niche

Apple ended up being a niche player for decades. I often show this chart below in class and, unless the room has a high-resolution projector, Apple’s market share isn’t even visible in the 1980s and 1990s. (As I stand at the front of the room with my Apple Watch, iPhone, and MacBook. Times change. :-)) 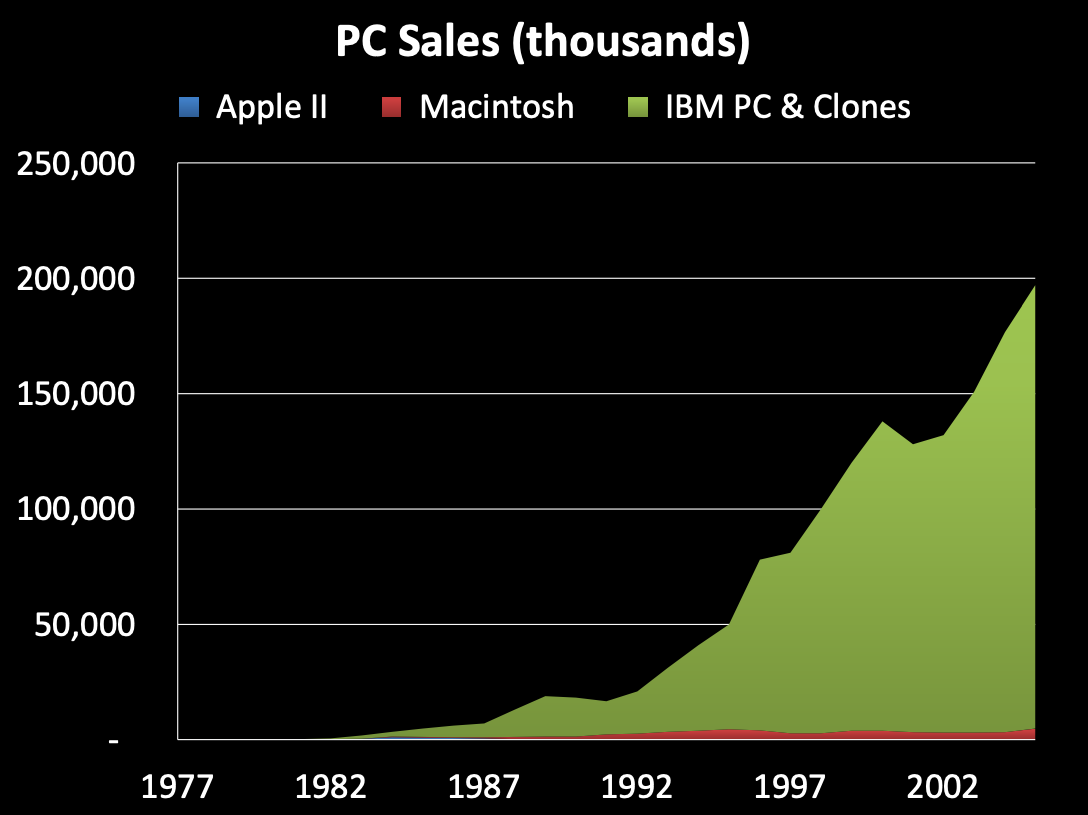 After being fired from Apple, Steve Jobs started NeXT. Between 1995 and 1997 NeXT sold ~50,000 computers total. For comparison, 80 million PCs were sold in 1996 alone. The company raised ~$200m in capital raised and sold to Apple for ~$500m for its software, not hardware. This was after they even built their own highly automated computer factory. $500m seems like a decent financial return, but the NASDAQ stock index increased ~4x in the same period. Investing in a mutual fund was a better bet.

Pixar Computer – Loser As A Computer Company (1 for 6)

Pixar made computers, not movies when Steve Jobs invested in 1986 for rights to Pixar’s software for the NeXT computer. That’s right, when Jobs invested in Pixar, it was a computer hardware company that sold a total of ~300 units.

Pixar dropped hardware production and focused on its Renderman software, which is in use to this day. It has never been a commercial hit – Renderman represented less than 5% of Pixar’s revenue in 2005. However, their demo group used the software to create movies including the one you’ve likely heard of, Toy Story, which grossed over $370 million worldwide. So a failed computer, then a small software company turned into a very successful movie company.

The first iPod was sold in 2001. Apple sold over 300 million of them over the next 10 years. Clearly a winner.

Many people forget that the iPhone was not Apple’s first phone. Under Jobs’ leadership, Apple partnered with Motorola to deliver the Rokr E1, the so-called iTunes phone in 2005. Remember this? (https://en.wikipedia.org/wiki/Motorola_Rokr).

Over 20 million iPods and over 230 million mobile phones were sold that year compared to perhaps 250,000 Rokrs. According to CNN, customers returned the ROKR at a rate of three to six times the industry average.

Multitouch user interfaces were invented in the 1970s. The first smartphone with a touchscreen and apps was invented by Frank Canova Jr, an engineer at IBM’s Boca Raton, Florida laboratory in 1992.

Apple started working on its first multi-touch interfaces in 2005. The first iPhone shipped in 2008. The iPhone was the result of integrating decades of innovation inside and outside of Apple. Given all the advances in mobile phone connectivity, the iPod music and movie business model, low energy processors, the adoption of the mobile phone-based Blackberry for email by almost every business person, and especially that web browser usage was growing exponentially, the timing for a mobile “Internet Communicator” was great.

Note that iPhone sales went down during its second year on the market and then shot back up after the introduction of the App Store, which was not a feature of the original iPhone.

The Apple II was an enduring hit in those early days. The iPod was a huge winner. So far, over 2 billion iPhones have been sold. Clearly, the genius of Steve Jobs and his collaborators can be celebrated.

As innovators ourselves, we can’t forget about the Apple III, Lisa, Macintosh, NeXT computer, the Pixar computer, ROKR phone, and other failures that are also part of his legacy. Steve Jobs oversaw more losers than winners and wasted hundreds of millions of dollars failing in the process.

What can we learn?

To learn more, I highly recommend: